Gabriela Gallardo Sandoval is one of the 9 people prosecuted in the so-called case of the Guevarist Land and Freedom Movement of Ecuador (MGTL). Gabriela was arrested and placed in captivity on May 19, 2022. After three months in prison, and by virtue of a Habeas Corpus action, she was released under house arrest due to a brain tumor that was not treated during Gabriela’s incarceration. she. Her partner and father of hers, her son Fabio, 11 years old, is also detained for the same cause in the El Inca Prison, in Quito.

On November 7 and 8, a preparatory trial hearing will be held, in which the defense of the 9 prosecuted Guevarists will present all the irregularities and violations of due process that occurred during the various stages of the preliminary investigation and prosecutorial investigation, with the purpose of requesting the nullity of the trial and the immediate release of the detainees. The legal action will be in the North Judicial Complex of the capital city of Ecuador, starting at 9:00 am.

The defendants, in addition to Gabriela, are Omar Campoverde, Juan Carlos Bustamante, Nelly Yacelga, Carlos Carguachi, Silverio Cocha, Ernesto Flores, Alexis Moscos and Cristian Caiza, all social leaders and militants of the Guevarist Land and Freedom Movement. Three of them have alternative measures of electronic shackles and periodic assistance to sign, while another 5 social fighters are still in prison, in the midst of a fierce prison crisis that began in 2021 and where at least 400 people deprived of their liberty have died. in brutal massacres.

What charges does the Prosecutor’s Office impute?

The accusation is for ‘trafficking in persons for the purpose of recruitment for armed groups and organized crime’. However, after 9 months of illegal investigation and more than 5 months in prison, the Prosecutor’s Office lacks evidence to justify his accusation.

-In Latin America there are countless dissident political organizations of the neoliberal capitalist order, some better known than others. What is the Guevarist Land and Freedom Movement of Ecuador (MGTL)?

The MGTL is a space made up of diverse youth, workers, professionals, artisans, men and women, where different approaches to social work come together, articulated under the same horizon: the construction of popular power for social transformation towards fairer societies, equitable and inclusive. The activities we carry out have always been of a public nature and are part of the dynamics of popular work, especially in urban-marginal neighborhoods and peasant and indigenous communities.

-What are your goals and strategies?

We understand the creation of popular power through political training, popular education, organizational strengthening, work with women, girls, boys and young people, and fundamentally the dignity of the lives of the most impoverished in the country. We seek to reach a society where we can speak of justice, equality and a dignified life for all.

-When were they born and why?

We are a social-based group that began in 2003 as a youth space for political and cultural organization. At that time, we mainly did vacation camps in poor neighborhoods, trained social organizations on different topics, and collaborated in the formation of journalism and ecology clubs in schools. Over time, the internal dynamics evolved according to the needs of accompaniment towards union, neighborhood, peasant, women’s, youth and cultural groups. Gradually, reality itself demanded a sustained presence from us to create and strengthen processes of struggle for social rights.

-What does it mean to be a member of the MGTL?

Assume a life commitment with our impoverished and excluded people; be able to be outraged by social injustice and work daily to change those conditions. But above all it means being willing to sacrifice our comforts, our time, and right now even our freedom to dream of a different world and to make that dream a concrete reality on a daily basis. 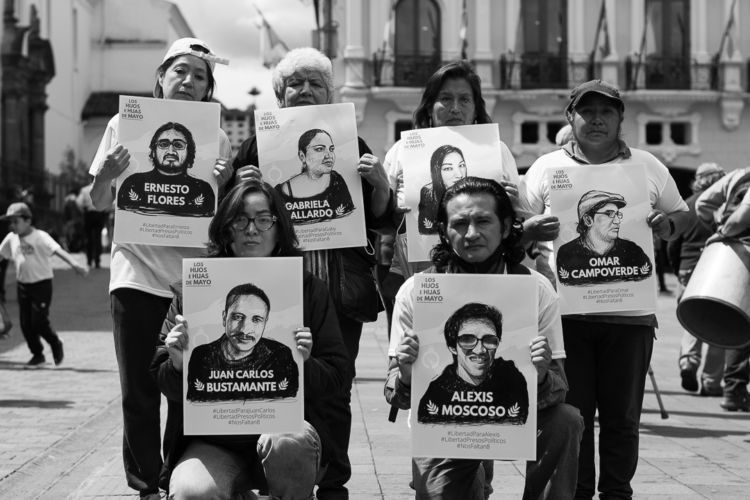 -What is your way of organizing?

We work from sectors or fronts according to the needs of the neighborhoods and communities. For example, the Lorenza Avemañay Popular Education and Communication Collective (CEPLA) carries out training activities with rural communities through popular education methodologies. Additionally, it supports the process of the San Roque Popular Work House, where children’s movies are made, and there is a popular library. There was built the space for the little ones and the popular dining room, as well as to carry out some artistic activities.

For tasks with young people we have the Guevarista Youth, made up of high school and university students who support developments in political education and student organization, participation in marches and activism to demand rights. In addition, it carries out activities associated with the proper use of time, such as the self-defense club and other artistic and cultural activities.

In the Manuela León Popular Women’s Front, dimensions related to the rights of working women and popular territories are worked on, in order to make visible the exclusion and discrimination suffered by poor women in a differentiated way. Training is given on rights, sexual and reproductive health, meetings and women’s circles; participation and activism in marches, and are responsible for training on gender issues for the other colleagues of the MGTL.

We also have the Center for Popular Psychology, which is made up of professionals in the area of ​​psychology who provide psychosocial support to impoverished people, allowing access to mental health for social groups that have historically been excluded from this type of care. In the Center they work on mental health problems as a social responsibility and the exclusion experienced by people with psychiatric conditions is explained in a participatory way.

Likewise, there are other more circumstantial instances, such as the Chuzig Brigade where professional colleagues in the health area accompany the creation of first aid brigades as care tools in emergency situations in those areas where health services are very distant. A similar case are the Water Schools in rural areas that so request, where training processes are carried out on care and defense of the environment and the revaluation of nature in the social, economic and cultural life of the communities. All these spaces have their own organizational dynamics and their managers who, in turn, coordinate with the other spaces to establish a comprehensive action.

-Why does the Ecuadorian government persecute them and why does it repress and imprison them with so much deployment of resources and brutality?

Because we are an organization that in recent years has had an important presence and reception from neighborhoods and communities, and because the institutional and economic crisis that the country is going through due to the ineptitude of the government means that more and more people are willing to organize to fight for their rights. I believe that they saw in us a potential enemy of the country’s plutocracy and that, in addition, they intend to use us as an exemplary lesson for other organizations that are also still fighting. We are convinced of this, since our arrest occurred a few days after the start of the popular national strike that had been announced by the country’s social organizations.

-Why do you say that your human rights have been violated?

Because a hidden investigation with characteristics of espionage has been carried out against us, without the support of judges, without us being informed as defendants or our lawyers, violating our constitutional right to defense. Throughout the process against us there are countless violations of due process, and in the raids, arrests and imprisonment of us, we suffer from various rights violations, such as degrading treatment, isolation and incommunicado detention for several days; psychological torture of both us and our families. All this in complicity with the big media that illegally showed our faces, names, ID numbers and added very serious accusations against us, accusations that until now the Prosecutor’s Office has not been able to prove anything.

Explanation, Advantages, Advantages and Some Steps to Choose CRM Software

Austria inn is on fire